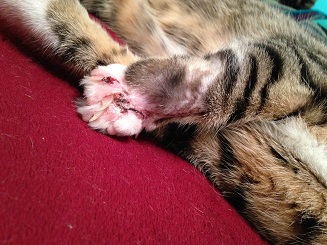 I have a story I'd love to share about how I found Quantum-Touch and have used it with one of my cats, complete with photos (though it's still in the process, so not truly before and after - more before and during photos).

The story is that my friend's cat Jack got his paw caught in something (we think it may have been a mousetrap) when he was 10 weeks old. The injury became infected. He nearly died and almost had to have the paw amputated. My friend called and asked me do energy work, that I knew at the time, via distance. Jack pulled through, though I didn't know how damaged the paw still was.

Two years later, my friend was moving and couldn't take Jack with. I agreed to welcome him to our family. Seeing the damage that remained, I began doing what I'd just heard a friend of my nephew had done to heal a facial injury on himself. I gathered a ball of qi (which I learned to do while practicing qigong) and held it near his paw. (He wouldn't allow me to touch it.) Jack laid down and started purring. I kept it up until I felt the energy break. I did this three times over the next several days. One day, Jack came to me, lifted his paw and meowed. He was asking for more. It was about that time, I noticed the crusty black scab, that had covered the whole top of his paw, was nearly gone! I took photos to document it at that point, knowing no one would believe me without that proof. 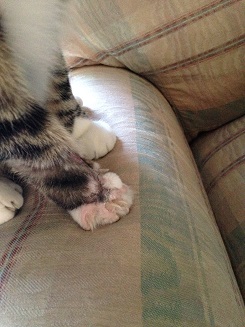 I told a friend what I was doing, and she said, "Oh! That's Quantum-Touch!" I had never heard of it but decided to find out more. I went to the website and watched the videos. I also ordered the book, Quantum-Touch 2.0 - The New Human.

After reading the book, I knew this was something I had to become certified to both practice and teach.

I continued working on Jack as I began the training process. One day, about six months after taking the first photos, I decided to take another to see if there was any progress. The difference was dramatic, as you can see.

I am eager to see how much more healing will take place, particularly now that I've taken the Level 2 course.

This, and many of the other healing experiences, I've been blessed to be a part of, is why I want to both practice and teach Quantum-Touch on every level. People need to know just what is possible when we tap into love and the power of, "What if?"

Cats Can Do Quantum-Touch Too! 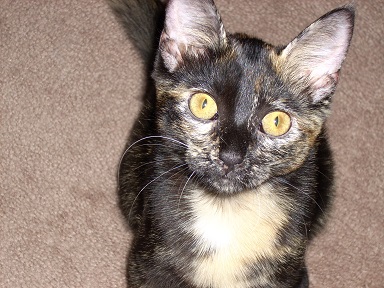 By the way, I have a cat who joined me in running energy on my daughter just last week. I was working on her back and wondering if I'd have time to work on her leg - both were causing serious pain - before she had to leave. Along came Inca, who carefully placed her hind paws against Savannah's leg and started breathing deeply! Truly anyone can do this! I'm also including Inca's photo.