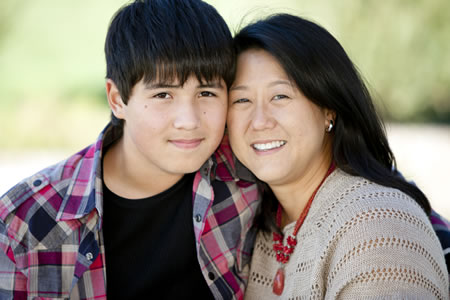 This is a digest of a boy who's got a severe accident at a year and half ago.

Naruda, a 17 year old, got a brutal accident and had a massive damage to his brain. His entire left brain got a cerebral infarction and stayed in a coma for a while. His consciousness regained shortly after but he still couldn't talk nor move at all and pain in both arms were so severe that he cried every time they tried to stretch them.

In Sep, 2011, about 4 months after the accident, his mother, Yoshie, raised a topic for a help in a Japanese social media called Mixi where we have a number of QT doers gather and exchange info.

Yoshie heard about the QT somewhere and hoped someone to come releasing his agony for his arms. Lot of us lives afar, so we instantly started to send remote QT one after another. Some offered to come in to do face to face hands-on. Things started to move.

We soon learned that Naruda was not expected to survive the accident. Doctors said that his chance was only 1% and even if he was going to survive, he would be in a vegetative state rest of his life. Yoshie didnâ€™t believe it.

On Sep. 29, Naruda had to take another operation due to infection to his head injury.
This time, he had to remove the skull which they inserted back in Jul again, disposed an artificial dura mater, transferred fascia from his own femur and cover up with scalp without the missing skull. After this, he had to stay skull-less for a half an year to a year. The operation took 8 hrsâ€¦.
This is just before heâ€™s going to take the operation. We all were there energetically.

After the surgery, he developed a high fever and stayed with it for over a week. The slight fever persisted over 3 weeks and he didnâ€™t seem to be too aware of his surroundings, so Yoshie informed us. We all sent the energy as much as possible.

Late October, Narudaâ€™s consciousness declined even further. Yoshie found out that Naruda seemed to be suffering from a hydrocephalus. Yoshieâ€™s agony was at max at this point especially after seeing beloved her son seemingly recovering once earlierâ€¦ We kept on sending energy to her entire family as we learned also that Narudaâ€™s older sister was suffering from all the stress and became seriously depressed around this time. Within a few days after they found out about the hydrocephalus, she also learned that the operation for it cannot be taken place right away due to its high risk.

Someone from the community went to visit them and gave a session, giving a validation for Narudaâ€™s recovery and that made Yoshie very strong. Caring message from Naruda who was not able to communicate at all was intuitively delivered to his mother. It was so touching that people who read the message wept. Sent energy was intensified even further. Then someone else had visited them in the hospital and gave more insights along side of a session.

Yoshieâ€™s mind had energized and requested doctors to operate on a shunt connection. The doctor had to check Narudaâ€™s cerebrospinal fluid to make a decision.

Again, someone else had visited them out of the blue. Naruda became able to answer by blinking after this personâ€™s visit.

In early Nov, Yoshie found out that Naruda can take the Shunt operation after 1 month or so. A Doctor originally told her that they had to wait for it for at least 6 monthsâ€¦ They have to make sure that his protein count in the cerebrospinal fluid isnâ€™t too high for the operation because if itâ€™s too high, the shunt will be clogged. Yoshie was thinking about changing a hospital to other prefecture if the current hospital cannot do it but now it can be doneâ€¦

Her prayer then was like this:
â€œMay his protein count be low so that he can take the operation 1 month later! May hydrocephalus wonâ€™t progress! May the shunt operation be successful and not infections afterwards! May rehab takes place right away and his recovery progress again! May he talk again! May his hands and arms will move again! May he walk again! May his smile be back!â€

We all supported that. (Later we learned that 90% of her prayer was answered!)
Someone else who does Chi-gong had visited them.

A few days later she was informed that the shunt operation had a high risk, she was also informed by other doctor that they can use a brand new shunt which they bring in for the first time can be used for Naruda. This was another miracle, Yoshie noted.

Mid Nov, they went back to another hospital to start rehab again. Their doctor there was rather surprised to see how Naruda was, as hydrocephalus was progressing but his conscious level was clearer than 2 weeks prior to that. Doctors couldnâ€™t explain this.

In Feb. Naruda turned 18. He communicated through blinking and let Yoshie know that heâ€™s going to speak, eat and move his hands all by himself while heâ€™s 18!

Within a week or so, he started to form some verbalization once. It wasnâ€™t quite words or phrases but he meant that he was talking! Yoshie was elated!!

In April, Naruda started to smile with both cheeks. (As his left brain was damaged, he had been able to move left side only slightly till then.)

In May, he was able to answer addition with blinking, started to move his left arm freely all of the sudden and was able to write letters again. (It was frozenpast 10 months prior to that!) QT, aroma massage from the mother is ongoing. Yoshie started to feel the energy in her hands and started to do QT around this time too.

In June, there was a rumor going on among nurses that Narudaâ€™s smile make them happy so that they want make him smile more. What a great influence to each other! He can smile full smile by then.

He got a Votox injection which helps his muscle to relax and move better. Itâ€™s working. Not too may hospitals are doing this treatment in Japan and he was lucky to have this done at where he is. Another miracle!

In Aug, he became quite humorous and the nurses adore him so much. His smile is his signature! Everybody just loves him!!

Yoshie took the L1 class in Sep. She is very happy that she can give QT session to Naruda confidently.

She noted that she really feels that the QT is such a loving energy. She happened to know the QT book in Amazon, got it and read it but not sure what it was. She happened to find out the the Mixi QT community and posted her desperate help. So many people have paid attention to that outcry, actually went to see them and now here we are.

Mid Sep, after Yoshie gave the QT, Naruda started to nod and shake his head for yes and no. He was not able to do that till the day before.

Within next few day, she gave QT to his neck and head all afternoon. Then he can hold his head all by himself. He needed a support to sit this way and couldnâ€™t do it more than 15mins a day before.

Oct., Yoshie is very happy that she can do QT. Her change is as significant as her son. Naruda feels very calm and peaceful receiving it too. She feels less irritated while driving as well and found how important breathing is. Naruda is joking around though he cannot use his words freely yet. Nurses are continuously laughing with him a lot.

Heâ€™s going to have his 5th surgery on Oct. 23rd Japan time. This time, heâ€™s going to have a ceramic skull positioned finally!
Along with other concerns she needs to deal with, finding a new place for the family was another big issue for them. Japan is not a wheel chair friendly country and majority of houses and facilities are hard to get by with wheel chairs. Again miraculously, Yoshie found a lot that they can build a house for Naruda as they need to welcome him back in a few years. Everything is going to go despite the hardest hardship we can imagine. She believes strongly that Naruda is going to recover further and surprise us more.

Hereâ€™s Yoshieâ€™s direct words;
â€œNaruda is now always smiling, being cheerful all the time and draws even more better things. I couldnâ€™t have imagine this a year and half ago. Now, everything around him is nothing but miracles. I wonder why and how this is happening!? Now I can do QT myself which is incredible as I hadnâ€™t have time nor chance while I had been in the hospital day by day. Miracles had been so far away, as I thought them to be happening in a TV or in books only. Iâ€™m in a stream of miracles now. Accidents are happening everywhere and every day. â€˜Being unconsciousâ€™ is quite a common word to hear in the news. However, when this happened to me, my world turned over. Then, I discovered that all this has immeasurable messages. To complete this journey, Naruda is going to recover fully. Please go along with this journey and stay with us.