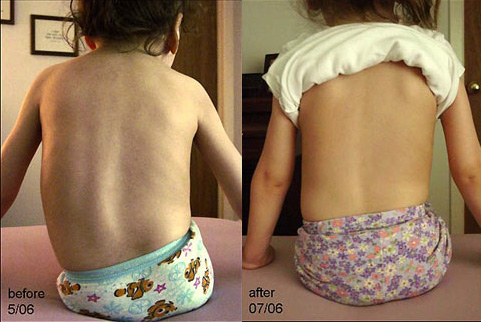 I am most excited to forward recent photos of a four year old little girl  who was diagnosed with Spinal Muscular Atrophy (SMA). The first photo was taken in May 2006 prior to Quantum-Touch, the second in July. Previously the child had developed scoliosis which seemed to be getting worse even though her back muscles had become stronger.

Her mother attended my June 3-4 Live Basic Workshop hoping Quantum-Touch would make a positive difference with the scoliosis. As you can see from the photos, it definitely has! Two or three weeks prior to the workshop, the child had a Quantum-Touch session with a practitioner in Houston. Two days prior to the workshop she had another session with a practitioner in Argyle.

At the workshop some of the students stacked hands on her back for a synergistic effect. Since the workshop, the child has received Quantum-Touch sessions from her mother 2-3 times a week with each session lasting from 5 to 30 minutes. This is a precious and very patient little girl.

Here's a quote from the child's mother: "I didn't video tape ANY of her absolute weakest times. I thought I was going to lose her and I didn't want to remember those times so I didn't record most of it. Yes, I have video of her former tremors, her inability to cough, her inability to lift her head, falling for no reason, etc... But I don't have her choking on water showing her scared little face (as if she was going to drown), falling over while sitting, collapsing severely at the knees and banging her head, etc... Those are things I didn't record, but I haven't forgotten them. Well, I don't have to go into details. It's just that nothing else that I tried worked for the scoliosis like Quantum-Touch, and that it took less than 2 months to see a huge difference."

SMA is the #1 genetic killer of children under two years old, and 50% of the children with the diagnosis do not live beyond the age of two. At this time, this little four year old girl is unable to walk or crawl independently. As a result of the positive changes taking place, everyone is very encouraged and excited.

The mother has requested names be kept private; however I am happy to relay any questions or requests you may have.