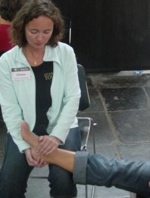 I have had amazing results like the rest of you but the most incredible one of all is how it (QT) has profoundly, radically changed my physical health. I broke my right foot 28 years ago and in the last 5 or six years discovered an entire bone has dissolved in that foot over the years! It has made it impossible for me to jog/run more than one or two times a week and only very short distances at that due to the immediate swelling and pain in my foot which took several days to return to normal size - meanwhile causing a bit of a limp which in turn caused pain in the knee and hip.

The same day I received my QT workshop, I had run that morning and was in unbelievable pain and could not even put my foot on the ground to step because the pain was so intense. The first thing I did with my newfound knowledge of QT was to run energy into my foot.  At first it hurt like crazy and then it just stopped hurting and felt completely normal! I got up, stepped on it and amazingly could actually walk with no pain. I admit I was absolutely shocked! Through the course of the day, the pain returned briefly on and off and then seemed to disappear. I went to bed that night with no pain but awoke during the night in such excruciating pain I thought I had done something horrible to my foot. That awful, burning pain lasted for over an hour and I continued to run energy into my foot and then the pain just sort of slipped away. I had one more midnight episode like that the next night and nothing like it since!

I ran the next day, and the next, and the next and almost daily since then often exceeding thirteen miles at a time at a pretty fast pace each time...I am astonished and wouldn't believe it if it weren't my foot! Occasionally my foot will start to swell during a long run and I start running energy ( I guess by intent or short distance?) during my run and I practice this a few times during each and every run and I have had no significant pain at all in many weeks...it is truly amazing! (I am secretly hoping the bone will grow back!) This is the most incredible tool for healing I have ever heard of - much less used. I am so grateful to have this in my life to share with all who touch my life!