Among the wide range of conditions helped by Quantum-Touch, many people are discovering how effective it is when working with burns. Below are the stories of people who have experienced this amazing phenomenon.

I once burned my hand while cooking in the kitchen. It was a second-degree burn, with a blister in the middle (you can see it in the first photo). I immediately began to run energy. The burn got hotter and more painful for about an hour, then cooled down. I ran energy while watching T.V., so I was doing something at the same time. You can see the photos of before Quantum-Touch and 24 hours after. At the 24-hour point, the burn and blister had completely disappeared. My friend, who is a nurse was shocked but she couldn't deny what had happened, given the photos to prove it. 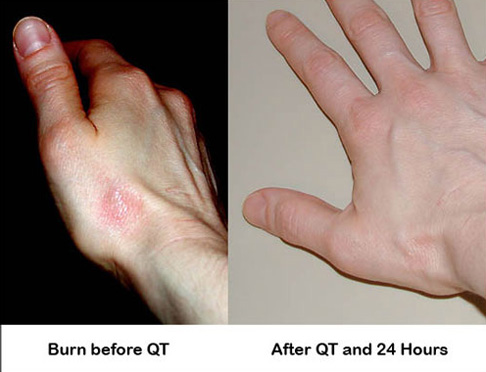 Did He Actually Burn Himself?

My four-year-old son leaned back against the stove and placed his elbow on the “turned on” hotplate. Between his screams and the burning smell, I ripped off his pajama shirt, grabbed an ice pack and set him on the lounge with me while I ran energy into the area. The burn was on that nice fleshy part, inside the elbow, and after about five minutes, we looked to see how bad it was. He had two blisters about the size of a ten-cent coin. I replaced the icepack and continued to run energy into the spot for about fifteen minutes.

At this stage, my son said it didn't hurt anymore, but I ran energy for another ten minutes (just in case). When we checked it again, the blisters had disappeared, and there were just two tiny red scab-like marks, which I then slathered with Shea butter. When I checked the marks again that night, you wouldn't even had known that he'd been burnt! My husband was equally surprised and very impressed.

The thing that stuck with me most though, was normally after being burnt (especially from an Iron burn) the pain comes and goes in waves, even with ice pack treatment and burn creams. (I too, remember how this feels!) But after running the energy into this burn, my son didn't mention any pain at all after the incident. The one thing that keeps it real, is the scorch mark and hole now in his pajama top.

The only thing I kick myself for, was not taking any photos!!! But of course, that is the last thing that runs through your mind amidst a crisis. I suppose for me, experience says it all.