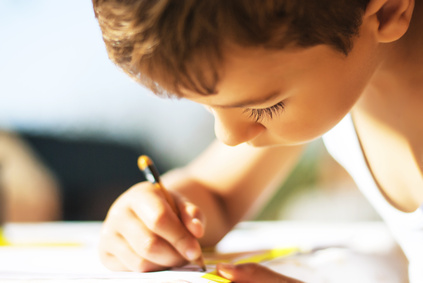 A seven-year-old came to see me. He stopped eating the summer before when his father died. He had lost lots of weight and tended to vomit every time he tried to eat. His mother was frightened. I had the sense to work on his upper chakras and saw that there was a tear between his 11th and 10th chakra. The 11th chakra, Richard, says represents the soul. It felt like the child was cut off from his soul!

So, from my heart to the space between the 10th and 11th chakra, I ran energy. He colored the entire time and amazingly kept drawing pictures that matched the energetic events I was seeing. When the energy was getting lighter he drew trees abundant with fruit. The trees stretched and billowed towards the sky, just like his energy opening.  When heavier energy was released he began drawing smoke and cement.  I was amazed as I watched this happening.  As soon as I saw the rip between the chakras was gone he announced he was done seconds before I could say it.

Two days later, his mom called thanking me saying he'd been eating massive plates of food with an enormous appetite ever since the session. Wow!  I could see he was lighter after the session but I had no idea what might happen. I hoped for the best and was grateful to get the wonderful report!