Helping Newborns And Their Mothers 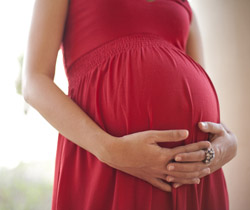 I am a labor monitrice, maternal-child health nurse and a hypnotherapist. I've worked in this field for over 25 years. About 8 years ago, I started training in Quantum-Touch to use with laboring moms. I've since gone on to take almost every advanced workshop Quantum-Touch has in order to give new families this gift  through their transition to parenting.

As I expanded my services from purely support at the birth to prenatal & postpartum coaching and Quantum-Touch visits, I added to my knowledge and experience. Because I have spent so many hours  directly running energy into women while they are pregnant and in labor, I started to be able to perceive where the energy was flowing and what it was doing within the body. Here are some interesting things  I've observed in the hundreds of hours of bedside care I've provided:

1. In acupuncture, one of the labor stimulation points to use when you are trying to help someone go into spontaneous labor is Spleen 6. This point is on the inner ankle about three finger breadths above the ankle bone. I have long noticed an association with how the energy goes into these points and the nearness of labor.

If you run energy into those points (I don't do this prior to 36 weeks), and the energy feels like it is running in easily (like drinking water through a straw), there is more than a week before the woman will usually go into labor. However, if the energy feels like it is going in slowly, like drinking a milk shake through a straw, the woman is probably within 7-10 days of going into labor. If you start running energy and it's not being taken up by the Spleen 6 point, and there is a feeling that the energy is pooling outside of the uterus, the woman is usually about 3 days or less from delivery. If the woman is facing medical induction, you can use this same point to push energy through, to help stimulate hormones that assist in getting the labor going. If someone is coming to see me to get labor going on it's own, I run energy into Spleen 6, Liver 4, and into the sacral area. Then I retest Spleen 6 to see if the points are closing after the session. I do Quantum-Touch 2 at the end of the session so it holds better in the woman's body.

2. I have noticed an increase in the number of mal-positioned babies than what I used to see. This problem can often be positively affected with Quantum-Touch. By the time the mother goes into labor, you want the baby to positioned so it's head is down, and the back is on the left side of the mother and  the small parts are on the right side. When the baby's back is on the right side at the end of pregnancy, there is a greater chance the baby may rotate through the occiput posterior position, which means that the back of it's head will be against the mother's back, instead of the normal baby's back of head to mother's abdomen.

When the baby is OP, the mother is more likely to have a longer labor that she perceives as stronger from the get-go. She is more likely to have more back pain than a baby in the normal position. If I find the baby has it's back on the right side most of the time in the last month of pregnancy, when she comes into see me I work with her to reverse the baby's position. I run energy into the area above the pubic bones and I may trace the turn that the baby should do as I run energy from the right to the left side of the abdomen. If the mom is in labor when this shows up, there is something very interesting that I learned awhile ago that helps babies to turn.

Years ago, I was at a birth where the baby was OP and the labor had stalled at 6 centimeters (you have to get to 10 prior to starting pushing). The doctor gave it a 3% liklihood that the baby would turn and my client would deliver vaginally. I realized that for a number of hours I had been running energy directly into her uterus. I had an inspiration to change my hand position and place each hand on the sides of her hips (along the curve of each ilium). 1 1/2 hours later my client had progressed to 10 and pushed her baby out vaginally with about an hour of pushing. It was quite astonishing!

3. Newborns are incredibly easy to run energy on and you can often affect a poor sleep pattern in a baby by doing Quantum-Touch on it. Many of my clients have requested that I move in with them and run energy on their babies every day because they sleep so much better after Quantum-Touch! I encourage them to learn Quantum-Touch themselves, as it is such a fabulous non-interventive modality.