Witnessing The Miracle Of Love 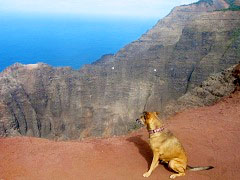 Kyla, an eleven-year-old mix-shepherd had developed a rash upon her forepaws; she had also developed several cysts over the years.  She was aging. After taking her to two veterinarians who offered nothing that helped, I thought, time to take matters into my own hands.

A friend had suggested a detoxification protocol. I gave her a few droppers full of the medicine over a few nights. Initially, she was fine, so I continued. However, one night within forty minutes of lapping the remedy out of her bowl, she was whimpering and shaking uncontrollably. Those brown eyes that had regarded me with such complete trust were begging for help. Tremors took over her body. The simultaneously low and high-pitched cry that came from her was painful to hear. I wrapped her in blankets at the foot of my bed, said a small prayer that this was a mere aberration and attempted to sleep.

In the morning, Kyla had not moved. Her eyes, exhausted and pleading, were outlined in a film of pain. She tried to get up with difficulty; her back legs not immediately receiving the synaptic message.

By night, I had to carry her outside to go to the bathroom, her body limp in my arms. I noticed that on her own she could no longer prop herself up, but rather collapsed onto the ground. One of the largest cysts on her body had dissolved, the rash on her paws had diminished, but she still wasn’t eating and her vitality was dwindling.

The second morning, I had to carry her to her water bowl. Her body was hot to the touch; fever had consumed her. She no longer looked like she inhabited her body, but rather was tethered to it, waiting for release.

With despair setting in, a miracle arrived. A friend directed me to Kim Luchau for a Quantum-Touch Healing session for Kyla. Kim asked her husband, Mark, who also practices Quantum-Touch, to help with this session, too.  Knowing that he’s great with animals, she felt he'd enjoy this opportunity.

While driving to the session, I peered through the rearview mirror and noticed Kyla had propped herself up for the first time in three days. When she met my gaze in the mirror, I felt her confirming her openness to this session. This touched me. After we arrived, I carried Kyla from the car onto a quilt for Kim and Mark to work with her outside.

Kim and Mark reverently attuned their focus to Kyla and even asked me to participate. They touched her along her spine and around her neck and began sweeping and breathing with Kyla clearly accepting their loving touch. Kim reflected, “Within a short time I began hearing messages for Kate coming from Kyla.  It was as if I was being asked to speak to Kate for Kyla.”

I can clearly remember the first words Kim spoke: “Kyla does not want you to worry if it is her time to go. She wants you to know, you will never be separate.”

Kyla lifted her head and looked right at me; I simultaneously received her look and started bawling. Kyla placed her head down, closed her eyes and relaxed into the healing. The floodgates opened.

“She has been with you since birth,” Kim shared. “She has been a spirit guide for you but you couldn’t feel her, so she incarnated so that you would.”

The depth of the love that Kim was confirming for me rocked my core. I always knew Kyla and I had a bond beyond comprehension, but to have that boundless, unconditional love confirmed outside of myself was humbling beyond words.

“She wants you to know that she will make sure you will always feel her.” Kim continued, “Kyla has had a hard life and you have loved her deeply and she feels that. She wishes that you would open to receive the love she has to give you, as you so readily give to her.”

I felt the searing pain of truth.

“She says though,” Kim chuckled, “That you try and do the best you can.” As the session continued, I noticed that Kyla no longer had tremors. Kim and Mark continued breathing and sweeping, while also contacting and clearing the communication from Kyla’s cranial nerves to her sacrum. I could feel for the first time since she took the medicine, her body was at ease. Kim remarked at one point that Kyla had shifted into processing her birth trauma.

“And I feel like she is choosing,” Kim continued.

“Yes,” I agreed. No more needed to be said. We would wait and see if Kyla chose to stay.

The session wound its way into a deep, peaceful place. Kim and Mark had graciously worked on Kyla for an hour. At the session’s end, Kyla’s eyes brightened and she looked lighter and more vital.

On the way home, a mere fifteen minutes after the session, I pulled the car over for Kyla to relieve herself. I already noticed a difference in her stance. She even walked over to guinea grass and started to chew. I couldn’t believe my eyes, I hadn’t seen her chew in almost four days!

Later in the afternoon, I realized Kyla was no longer hot. Her fever was gone. When I carried her down the steps outside, it struck me, her body was heavier. I started to cry because I realized Kyla had chosen to stay.

Over the next five days, Kyla received a series of acupuncture sessions. It is my belief that the Quantum-Touch session served as the crossroads of Kyla’s spirit.

Each day, after that session, I literally watched Kyla’s spirit pour back into form. Two days after the session, she was eating meager amounts. After four days, she was eating rice and broth and could walk on her own for fifteen minutes. On day five, she wagged her tail - a sight I thought I would never see again.

Within seven days, her full appetite had returned, all of her systems were functioning with normalcy, seventy-five percent of her cysts were gone, her rash was gone and the skin of her forepaws was healthy. We were back to taking our daily forty-five-minute walks along Kauai’s Kealia beach.

Everyone who saw her was in awe. I have never witnessed the miracle of love the way I watched my dog reincarnate. The healing and the messaging that we shared through Kyla’s Quantum-Touch session has altered me in more ways than I can describe and it has granted Kyla her life back.

The photo above is of Kyla and was taken three weeks after her Quantum-Touch session with Mark and Kim. Kyla had completed a seven-and-a-half-mile hike along Kauai’s notoriously lush and strenuous trails of the NaPali coast.