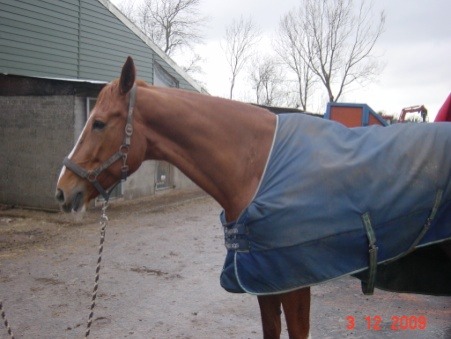 Tirana is a willful pretty mare and is willing to work for her owner, Sabine. She always wants to please and doesn't let a little pain stand in the way. Last December, she was diagnosed with hoof cancer with no hope of a cure from the vet, in spite of all the painkillers and antibiotics prescribed.

It was decided to stop all the medication and to put her down in a week. The owner really cares for her horse and was devastated so approached us for advice. We all conferred and decided to give it a-fourteen-days try. That is way too short to do anything effective but it was a start.

Her hooves were cleaned every day and the holes filled with a disinfecting material. One night, Piet was rudely awakened by an image of Tirana invading his sleep to tell him someone had neglected to wash the hooves after the cleansing and they were hurting her.

Piet called the owner first thing in the morning and confronted her. She shamefully admitted it and is in awe of Piet ever since that day.

Three of us went to Tirana that day to give her a boost for she was giving up. After more than an hour of intense work, she shifted her mind, and started walking and coming back to the world. For two more months, we worked on her once a week, her hooves were cleaned and she was taken for walks outside.

The third month, we only did supporting work for conditioning and such, for the cancer treatment was not necessary anymore.

It will take the hooves at least a year to completely renew themselves but, for now, the owner is still riding her and having loads of fun. Tirana has a passion for riding and running outside.

Every now and then we give her a check-up but mainly she is doing great!