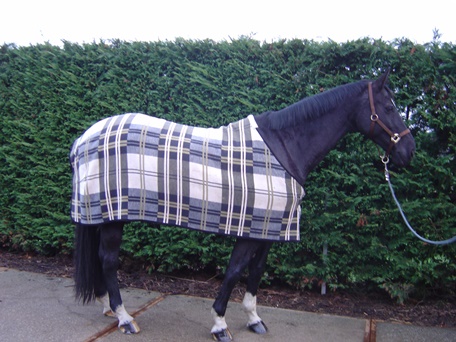 Orrie is a 14-year-old gelding, who is a major player in the dressage field. He has been working all his life and has always enjoyed it. One day, the trouble began. His rider Sandra, a very petite woman, felt he was out of control, up to the point of being real dangerous.

He is a very huge horse and so she got scared. A number of well-known trainers and therapists came to the rescue but didn't prevail. The problem became so big, riding was impossible. The challenge for us, to work on such a majestic impressive horse, was a large one. We sent in a long list of questions to get a look inside.

Orrie was experiencing back pains and his eye was not functioning properly. While Piet was talking to Sandra, Monique had a moment with Orrie in which they shared a moment of pure fear and pain: Sandra's fear and pain. Instead of being shut off to the world, he was trying to cope with the fears and pains of his owner.

We split up the team and worked simultaneously on horse and rider. Piet on the rider and Monique on the horse. Orrie had a past traumatic experience, which led him to overreact when something around him was scaring him. Because of his enormous size and weight, Sandra had been tossed off in a very bad way, a few times, so she enhanced his fears because she was scared too.

Piet worked on Sandra's back and her fears and Monique worked on Orrie's constitution and anxiety to mainly get him to relax and trust again. During the separated treatments, we advised Sandra to play with her horse, be very affectionate and give him loads of attention. That went very well. We then joined up again after 4 treatments and worked on the dominant problem that appeared. We worked together with Quantum-Touch 1 and Supercharging to improve his eyesight.

After the history of Sandra had been cleared and dealt with, it was time for the first ride. It was impressive. Such a petite female and such a huge majestic horse dancing together. I think all horse owners present that day, dream about owning a horse like that! The next week, we went to her house and stables to work together on the first ride on their own turf. Orrie got a bit scared a few times, but Sandra kept her cool, did her breathing and we supported from the sides with Quantum-Touch. Orrie relaxed enormously when he felt us, and ever since that day, now a year later, he and Sandra work, play and ride in competitions together, successfully!