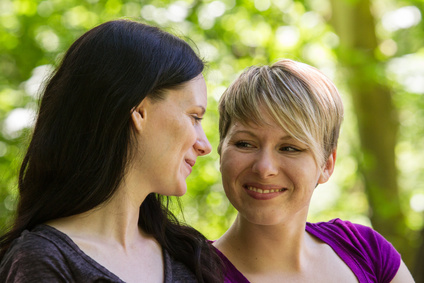 My daughter had a traumatic delivery and recovery from birth two and a half years ago. She had a lengthy labor, and three hours of full dilation before they finally decided to do a C-section on her. Recovering from the operation was very difficult and it took her more than a month to have any kind of strength for functioning at all. She complained numerous times that the incision scar "grossed her out" and she had a bad feeling about it, even though she healed nicely.

I began thinking about Quantum-Touching her scar, hoping that maybe it would release the emotional component "locked up" in there, and I mentioned it to her. She agreed, but we never "found the right time to do it."

She began putting off getting pregnant again because of her bad memories and fears.

Yesterday a friend told her that after using birth control for a while she may not be able to become pregnant "at the drop of a hat" and this made her feel concerned and anxious.

So.... she asked me for Quantum-Touch on her uterus and scar.

While I was working I felt the need to touch her heart area and there was a strong feeling of connection. Then I moved my hand to a slightly different position on her lower abdomen and all kinds of things happened.

Tears began pouring down my face, while at the same time I didn't feel like I was crying. I wasn't choked up or anything, just the tears pouring down my face. I felt a tremendous surge of love for my daughter and powerful energy in my hands. After a few moments I opened my eyes to ask her what was happening and she told me that she suddenly had memories of the hospital and she had begun reliving the trauma.

I continued and had a strong feeling of glimmering at the edges of my internal vision (my eyes were closed). I told her she needs to ask God for healing and felt my own connection with the above... and some kind of resistance on her part, although she has a strong belief in God.

After several more moments I felt a flood of golden light coming in, my tears stopped flowing and when I asked my daughter how she was, she was calm and centered. We had some good strong hugs.