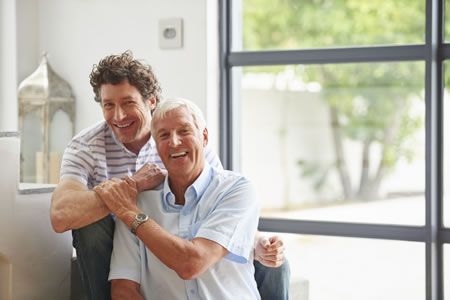 For many years, my father endured severe pain caused by a congenital disorder in his spine; a kind of adhesion, resulting in a continuous kind of short circuit causing nerve pain. As a six-year-old, he fell from a tree, breaking his tailbone and as a rugby player he fell on his back after a collision with a big opponent during a match. As long as I can remember, he has suffered from a hernia and back problems.

The nerve pain radiated from his lower back (vertebra L3/4) down into his tailbone and both legs. Apart from continuous pain over the last three to four years, he fell three to four times a week. This was caused by a sudden loss of feeling in his right leg, in turn causing a great sense of insecurity; hindering him in everyday things as simple as preparing dinner, or taking a coffee. As a result of these frequent falls, he also suffered from concussions, bruised ribs and a hole in his head.

Last year, on Mother's Day, I asked him, “What do you wish most?"

He replied, "If I no longer fall, I would be very happy."

I then started aligning him for about twenty minutes. Since then, and to this day, he never fell again. A truly fantastic result!

Although, we had achieved a breakthrough, the pain continued to be relentless, varying in intensity. I gave him irregular Quantum-Touch sessions, sometimes causing relief, sometimes increasing the pain. But above all, he felt that a lot was happening in his body, which also raised his anxiety that the unexpected falls might return, or that the pain would get worse, or that it might cause new pains. Therefore, we completely stopped the Quantum-Touch treatments.

Last February, the pain became unbearable to him and the situation became hopeless. I decided to treat him for five consecutive days and simultaneously placed a healing request in our private Facebook group.

After those days, he had 40% less pain in his legs, less pain in his tailbone and spine and he felt his feet again. (I didn’t even know he had had no feeling in his feet for years!) Again, so fantastic but most important, it also strengthened his confidence in Quantum-Touch. After that week, I continued to treat him remotely. The pain continued to diminish in his leg, but the pain in his tailbone and spine were so bad, that he stayed in bed again the entire day.

At some point, he had a small wound on his tailbone. I decided to go and visit him again (unfortunately my parents don’t live nearby). When I arrived, he was in so much pain that, despite Tramadol (morphine-like painkiller) he was in bed, crying. But after the Quantum-Touch treatment, the pain fortunately diminished to a bearable level. The second day I treated him, really for only five to seven minutes, but the result was surreal: He was pain-free! Really, no more pain. Unbelievably magical!

Afterwards, he told me that he had had a strange experience; he felt that two hands had “lifted and put down his spine” after which he experienced the feeling of a warm shower on his back, while his legs grew very tired.

One week after this magical event, a splinter came out of his tailbone! Now, almost four weeks have passed and he is still pain free, only suffering from withdrawal symptoms of Tramadol.

I have two stunned, but above all very grateful parents! It is such a beautiful experience to witness and sense the collective Quantum-Touch healing ability; my sincere thanks to everyone who participated in this healing.