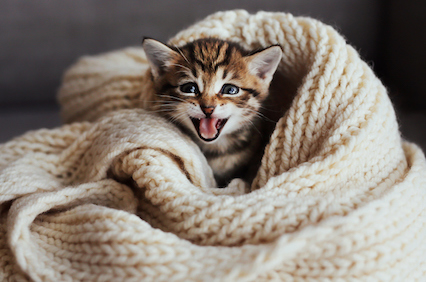 This summer, a young boy, new to the neighborhood, knocked on my door with a little kitten in his hands and said, "I found this kitten in the Kroger parking lot, do you want it?"

He put the pretty little 5-week-old calico kitten in my hands and ran away. This took place on a Saturday that happened to be my birthday and it's a good thing I took the kitty because it turned out that she had 3 fractures in her right hind leg. Right away I noticed that she walked with only 3 legs.

We went to the vet first thing Monday morning, and he x-rayed the leg and made a cast for it. The vet said that she had 3 fractures in the leg and the kneecap was situated on the side instead of in place at the front of her leg. He said she would always have a limp and would have arthritis later on.

I saw the x-rays and the ends of broken bones weren't even connected. They were bad fractures. Of course I did Quantum-Touch on her leg several times and the leg had almost healed in two weeks.

When the vet took the cast off and x-rayed the leg, the kneecap had moved around, almost in place. The vet was very surprised and laughed as he said, "Aren't cats amazing!"

Her name is now Pippi, and she has no limp and acts as though she never had a broken leg. (Even though the kneecap didn't totally move into the correct place, it doesn't hamper her at all.) She's a healthy, eight months old now and like most kittens, climbs the curtains, scampers up and down on her 48-in high cat tree, races around the house and jumps up and down from high places.

Last week, I found her balanced on the top of a door that was open about 2 feet away from the top platform of her cat tree. Cats are amazing but Quantum-Touch is even more amazing! I appreciate it more than I can say.