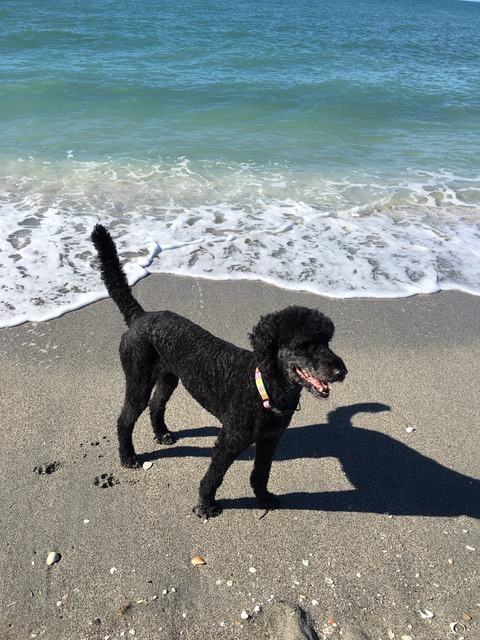 I would like to share a touching and well documented testimony that I received from a client, Joan Keller, and her dog, Bella (pictured right), about our Quantum-Touch session.

It’s been 2 years, now, since I relocated to the Venice, Florida area. So many changes have taken place from selling my home and leaving my job and family. I never could have made this move without my spirit relationship and my partner, Bella. For all the animal lovers, Bella is my 12 year old Labradoodle. She has been my companion through all my sleepless nights, as well as my friend when no one else was there. It is truly amazing how we can build a bond so strong and loving with our pets.

Several months ago, Bella seemed really off. Her appetite changed rapidly and she developed blood in her stool along with vomiting. For those who have pets, you know how panic can set in when they get sick. I called the vet and they took her right in.

After a lengthy visit and all kinds of tests, the vet said her blood count was really off and he wanted to do an ultrasound on her. I asked if I could go in with her. They shaved her stomach area and as he did the ultrasound I could read the concern on his face. I tried so hard to be patient.

He then said, "This spot here is a tumor on her spleen." He looked very concerned and I asked what that meant. He said that over 60% of the time when he sees this, it’s a malignant tumor. He went on to say that if this is cancer, the tumor is very fast growing and with her age it would not be a good outcome.

I just panicked and began crying and said, "She is all I have here. I can’t lose her." He suggested coming back in a week or so and see if it had grown. That would be the indicator of my worse fear.

It was a rough several days thinking in my mind that I could lose her. I just couldn't let that happen. I had to find someone who could help. It was then that I called Carol and asked if I could set up a meeting with her. I was just physically sick with worry and knew I had to try something that the medical community did not offer.

We met at Carol's home. Bella and I sat in the room with her and talked for a while. I could sense that Bella seemed a little restless and paced a bit while Carol talked. Then she called her over and worked on her. I remember her placing hands on Bella and she became very still. I blanked out a little but felt that something special was happening. I began having this sense of peace and calm. She then gave me a message from Bella. We talked a while after that and Carol said Bella would be okay. This was not cancer and she saw the tumor shrinking. Wow! I’ll take that word home with me.

I remember having such a feeling of peace, knowing that things would be okay. It was around a week later and Bella was due for another ultrasound. When the Vet walked in the room I said, “I don’t want any bad news because this is not cancer. I know she is okay." He gave me this weird look as they took her back to the table. They shaved her down again and as he was doing the ultrasound he went over and over the area.

He said, "Well here is the tumor and it appears that it has gotten smaller." Smaller? I told him I knew she was getting better. He looked a little puzzled and I told him what I did. Of course, I’m sure he thinks I’m a little out there but I was so thankful. He said, "Let’s do the test in a week again."

We did and the tumor was still smaller! He said, "I can only conclude that I’m 95% sure that this is not malignant and we will not have to treat her for this."

Thank God and thanks to Carol for her wisdom in using her special gift to bring peace to me and help heal my best friend.