A Spring Filled with Buntings 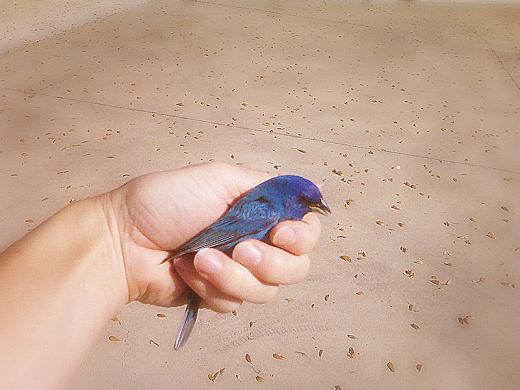 I am fairly new to QT but have recently attended the Supercharging Class in Houston with Alain. Wow and I mean wow times ten. I have already signed up for Core there in June.

When I saw the gorgeous blue feathers of the sprawled and still bird on my sidewalk, my heart sank.

Buntings, both indigo and painted, seem to be plentiful here in Central Texas this spring, but not so plentiful that it was not painful to see one lifeless upon the ground At first I thought my rascal cat Aidan might be the cause of this pitiful sight, but he was inside the house and could not be found guilty of this bird's condition.

The head was turned under the body, the wings were open, the feathers disheveled, the beak was open, the eyes were closed.

But it was breathing. It was alive. Brilliant blue plumage throughout meant this was a male. Females are more brown in color.

I picked the beautiful jewel of a bird up and immediately began to "run energy" into his body, the term used by Quantum Touch practitioners to deliver healing. It didn't look good at first. The beak remained open and the eyes closed. The head lolled about a little, I was afraid of mortal injury. I asked for assistance from Archangel Raphael.

Slowly, then, the bird came back to life. The eyes opened first. He lay sideways like this in my hand for many minutes.

Then the beak closed. Its body was still limp as I increased the energy flow and centered it within its neck region and then, within its heart. That seemed to work very well and suddenly he became alert and sat up in my hand. 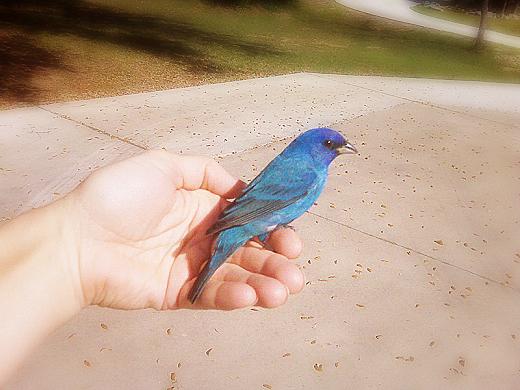 After a minute or two more he comfortably perched on my finger and began to look at me in the eyes. Back and forth his head turned and we seemed to have a bit of a conversation. I switched hands and fingers slowly, while he perched and re-perched, encouraging a bit of movement, but he seemed to be in no hurry to leave. He stayed on my finger for a good long while, once stretching his wings open and closed to arrange his feathers back into position.

"Don't you think you ought to fly up into that tree now?" I asked him gently.

And off he went and did just that, but stayed in the lowest branch looking at me for just a little while longer.