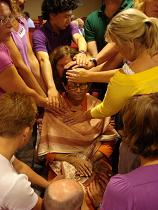 We had a marvelous week with Richard in the Netherlands! My daughter Isabella, Linda Menkhorst and I (Yolande van Rosmalen) gave Richard a session on Friday night before the lecture. When he told my 16 year old daughter that his back pain really was relieved and thanked her for her help she said: "But you did it by yourself, you are the healer...." (yes, she is a good QT student!).

The basic workshop was attended by more than 70 people, from the Netherlands, Belgium, Great-Brittain, Japan, Germany and Dubai. The atmosphere was very special, filled with love and respect for each other. Richard spoke with so may people, many pictures were taken and everybody had a wonderful time. Many "miracles" happened, pain dissapeared, broken shoulders felt better, a painful arm after surgery went from an 8 to a 1, headaches, emotions and other painful things were relieved.

I think the most important thing this week was that it wasn't a big event with thousands of people and the "master" far away on the stage, but that Richard was in the middle of all of us, and we could share our QT experiences with him. We inspired each other and QT in the Netherlands is alive and growing faster and faster.

Thank you Richard, for your support, your inspiration and your love!

Learn QT! Attend a Live Basic Workshop Near You!

The Live QT Basic Workshop is a 12 Hour course, taught by certified Quantum-Touch instructors all over the world.