The True Magic of Touch is Life-Force Energy

The True Magic of Touch is Life-Force Energy

The True Magic of Touch is Life Force Energy

For decades, physicians and psychologists have been praising the tremendous value and importance of touch. Studies have shown that babies who are not touched will not grow as quickly as their counterparts who are held regularly. Beyond slow growth, these babies often have weakened immune systems and are more subject to illness. Babies, who are profoundly deficient in their need to be touched, may also suffer severe emotional damage and even violent behavior. Psychology studies have also shown the devastating impact of not being touched in experiments with monkeys taken away from their mothers. 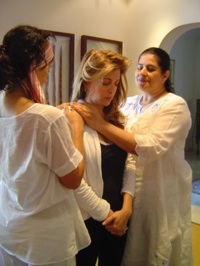 If touch deprivation is abusive, then it stands to reason that abundant touch would be healthy and beneficial. In Jean Liedloffs excellent book, The Continuum Concept, she discussed how children of the stone age Yequana Indians, living in a " primitive community in the Brazilian jungle, were held constantly when they were young. As the children grew up, they exhibited no violent behavior. In her two and one half years with this tribe, she realized that children willingly obeyed their elders, and that toddlers played peacefully together without arguing or fighting.

Consider that in contrast to being held constantly, it is still a common practice for babies to be separated from their mothers after birth due to medical intervention in maternity wards. These isolated babies hear nothing but the crying of other newborns. Away from the arms of their mothers, they cry themselves to sleep.

The question I am raising is what is touch, and what makes it so important? If touch were merely physical contact, a mechanical rocker and a moving piece of rabbit fur could substitute for much of a babys touch needs. But I do not believe that the value of touch is simply physical. I believe that it is much more than just the physics of being stroked. In my opinion, the true value of touch is the life-force energy in that touch.

This came more clearly to my awareness this year in regard with the case of Teddy, a 13-week premature baby. Teddy was the seventh child born from a woman who has been an alcoholic for 10 years. He was diagnosed as with severe fetal alcohol syndrome, tested positive for crack cocaine, and the babys doctor said that he saw no real hope for this boy. At the time of his birth, Teddy could not move any muscles and would lie helplessly as a tiny limp bag of bones. His eyes were tightly closed and his mouth didnt have the muscles to suck from a bottle. He was only sufficiently developed to be able to swallow. Teddy was so tiny; his whole hand was smaller than (the foster father) Michaels thumbnail.

After two days in the hospital, Teddy was released into a foster home where the adapted father, mother and all five children all knew how to use Quantum-Touch. Everyone in the house ran energy for Teddy. (Keep in mind you only need one person to be effective, though it is more fun with seven.) When Teddy became stronger and could cry for food in the morning, Michael would pick up the baby and run energy. Amazingly, Teddy would stop squirming and crying within a few seconds, and become completely relaxed in Michaels hands. After receiving Quantum-Touch, Teddy would sit quietly and wait patiently for his food formula as it was being prepared. This response is highly reminiscent of the story of the frightened bunny in chapter one that flipped over on its back, or of Henris highly shelter conscious turtle, in chapter eleven that would rest for an hour with its head and limbs outside the shell while being held.

When Teddy got older and it was time for his vaccinations, all the other children screamed as needles punctured both thighs. Michael simply put a hand on Teddys chest and ran energy. To the surprise of the nurse, Teddy didnt need to cry at all. On the third round of vaccinations six months later, Michael experimented and lifted his hand off Teddys chest after the second inoculation. Teddy immediately started to turn purple and begin to cry. Michael placed his hand back on the chest and within a few seconds, Teddy took a big sigh and became relaxed again.

Michael tells me that when he walks into Teddys or startles him, as soon as Teddy sees his face, he just breaks out and laughs. Today Teddy, or little Boo Boo as he has come to be called is a source of amazement to his doctor who has proclaimed that he looks like a completely normal baby and that he cant believe this is the same baby. Now that Teddy is 10 months old, all developmental indicators are within normal range and age appropriate. He is at 100% on the developmental grading, is of average weight for a child his age. There is no trace of addiction or facial morphology from fetal alcohol syndrome.

In the words of Dr. Norman Shealy, M.D., in a recent conversation, I would love to see every premature, sick or addicted baby be treated with Quantum-Touch. Perhaps one day that will happen. I figure that it is only a matter of time.