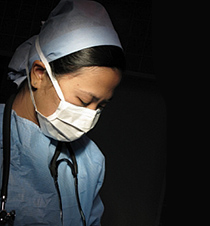 As a certified registered nurse anesthetist, I am intimately acquainted with pain and stress both on an acute and chronic basis. I have an arsenal of high-tech equipment and a battery of drugs to care for my patients needs. Unfortunately, it is not enough. An ever- increasing number of patients do not have the resilience to handle what their bodies need . Patients with end-stage disease processes may not tolerate narcotic or sedative drugs, patients with RSD (Reflex Sympathetic Dystrophy) and other chronic pain disorders have no further drugs to try.

Fortunately for me, my alternative modalities have been a Godsend in my work setting. I practice multiple modalities including Usui/Karuna Reiki, Craniosacral, Quantum-Touch, massage, and Integrative Energy Therapy. While any of these therapies can be practiced individually, I often integrate them in accordance with my patients/clients needs. I do, however, practice Quantum-Touch no matter what modality I choose to use. It is a wonderfully complementary modality, enhancing the effectiveness of whatever I do.

When I began my journey into energy work, I compartmentalized it and kept it secretive. As a nurse anesthetist, my entire world is governed by pragmatism. I am always prepared for the never ending what ifs that roll through my mind. How can I respond to the rapid changes in a patients condition? I was either in science mode, or energy mode. Never the two should meet.

What Did You Do?!

My first adventure it combined medicine and energy during what should have been a totally uneventful, ho-hum surgery. I had a skilled surgeon, and healthy patient. This surgeon could do a back in record time with minimal trauma to the tissue or minimal blood loss. However, this patient did not follow the norm. He continued to ooze, no matter how careful the surgeon, nor how much the tissue was cauterized. Eventually, the blood loss required intervention on my part. Fluids and drugs were administered to normalize the pressure as the surgeon tried to stem the flow. Finally, I thought since nothing else seemed to work, Id try giving the patient energy.

The surgeon popped his head up over the screen, and asked, What did you do? Wide eyed, I responded, nothing, why? The bleeding had stopped, and I was not admitting to anything. Needless to say, the surgeon tracked me down after the completion of the case to investigate further. (Eventually, I worked on his gout which was aggravated by the long hours of standing at the operative table.)

Once may have been accidental. Perhaps something else had happened. However, there is no shortage of bleeding in the operating room. At this time, I did most of the complicated open heart procedures. During long periods of time on cardiopulmonary bypass, the blood components can be battered. Coming off bypass can be a blood bath. Now as I said, I am ever the pragmatist. I have to follow established treatments and protocol when giving anesthesia. And, I had not yet decided that doing energy work while giving anesthesia was something I should be doing, nor had I developed the sufficient skill level needed to do it simultaneously. But when all else fails, why not try it. It works. Bleeding was controlled, and my life was much easier. Still, few knew that I was running energy on patients.

I came out of the energy closet at church one Sunday. Our service can be rather aerobic with various standing/sitting work-sessions. This little lady stood up wobbling, as is normal for this octogenarian, and promptly died. Now I am the lead soprano and sit in the corner by the pipe organ, hidden from view, on the choir platform. I hear someone say to get her on the floor, and the pastor holler my name. To this day, I do not know how I got out of the choir loft. I went into immediate send mode as I made my way to the back of the church where this little lady lay surrounded by three health care professionals, doing nothing. As I approached, her heart started beating again. She still was not breathing. As I prepared to start mouth-to-mouth resuscitation, THE VOICE appears in my head telling me do an energy resuscitation.. Have you ever tried to argue with THE VOICE? This goes against everything in which I believed. . So, I place my hands on either side of the ladys head and run energy while mentally screaming at THE VOICE that this had better work in a hurry as I should be doing rescue breathing.. I have been running codes for decades, and energy work is just not what one does. To my amazement, she starts breathing, and turns a beautiful pink. In the ten years Ive attended this church, her color was a pasty white. After I convinced the lady to go with the ambulance attendants to be checked at the hospital, the pastor corralled me to ask for some explanation of the miracle she and the congregation witnessed. I am now doing healing services at the church.

More Experiences in the OR

I am now at a point in my evolution in both my careers that running energy is second nature to me. I feel no conflict incorporating Quantum-Touch in any aspect of my life. The following reflects some of my experiences within the operating room.

When a patient is in septic shock, measuring the blood pressure can be extremely difficult. Medications are titrated according to how the patient responds to a given dose. At these times, it is advantageous to place a catheter, similar to an IV, into the artery to measure the blood pressure beat-to-beat¦if you can find a pulse to locate the artery. If you do Quantum-Touch over the artery location, you can bring the artery up to the surface, such that you can instrument arterial line placement. This I have done numerous times.

Waking up from Anesthesia

Police officers and firemen awaken from anesthesia in a panic. They are far too accustomed to dangerous situations and cannot immediately acclimate to their surroundings. Most go into fight mode. The usual response is to body check the patient by holding him to prevent the accidental fall from the operating table. These patients attempt to match force with force, and can be incredibly strong. If you run energy into the occipital ridge, it seems to reacquaint the brain with the rest of the body, and they calm. Air traffic controllers can also be a handful.

Teen aged boys can have stormy emergences from anesthesia. Once asleep, they want to stay asleep. They do not want to awaken. But when they do, they come up swinging. I happened to be walking past a room where six people were trying to hold a young man on the table, yelling at this kid to hold still. The anesthetist is a body builder, and this patient is giving him a lot of trouble. I walked into the room, placed my hand under his head and ran energy. He went into a docile state. My friend then tried to remove the airway from his mouth and this patient would not stop clenching it. I placed my hand over the distribution of his facial nerve, and he stopped clenching. Out came the airway.

I worked with an ENT surgeon who would only do parotidectomy surgery with me as the anesthetist. At the surgeons request, I do Quantum-Touch on the patient to bring the facial nerve up to avoid any damage during the facial nerve dissection. Intraoperative neural monitoring is a constant. By adding energy to the case, the surgeons operative time has gone from 4 hours to 1 Â½ hours.

I was given a heads up from the emergency room about a patient about to arrive in the OR for an appendectomy. That raised the indices of suspicion. The ER never does that. The patient was a drug addict, and not in the best of moods. Putting the patient to sleep was the easy part. Adjust for his tolerance to drugs, and off to sleep he went. The surgeon was worried about his emergence from anesthesia, fearing possible suture rupture if he became violent. Quantum-Touch was given the entire case, and nothing detrimental happened to the joy of each and every one of us.

Consider the hypoxic patient. I have several patients on supplemental oxygen with a baseline of Sp02 levels of 90-92% before giving them any sedative medication. Upon administering anxiolytic drugs such as Midazolem and/or Propofol infusion, Sp02 dreases, necessitating an increase in supplemental 02, usually bring me back to the patients original baseline Sp02. If I then reach a steady state of drug therapy, then initiate energy therapy, the 02 ALWAYS increases, usually to the 95-97%. This increase has sustained for approximate 4-hour window after leaving my hands-on treatment.

I have had a morbidly obese patient with a brain tumor, with a base Sp02 of 87% presenting for a MRI under sedation. With supplemental 02 by cannula and minimal sedation, his Sp02 was 79-83%. With this patient, I did only Quantum-Touch and raised his Sp02 to 92%. If I ceased running energy to walk to the other side of the room to generate a BP, his saturation plummeted, rising again with resuming Quantum-Touch.

During my longer cases when I have more playtime, I have discovered that I can reduce the amount of anesthesia required, as documented on the BIS monitor, by up to 20%. (A BIS monitor quantifies the EEG compressed spectrum array.) My patients have a more rapid emergence from their anesthetic. I also have noted that patients with a history of emergence delirium awaken smoothly, especially appreciated both staff and patients.

The traditional treatment for patients with RSD centers on pharmacological buffet of drugs, and nerve blocks, all with their corresponding side effects and untoward sequelae. Clients that have been referred to me have noted a significant decrease in muscle pain and spasm. If the client arrives with his RSD active, the skin temperature as measured by laser temp, may be as low as 72Â° F. Within 5-7 minutes of initiating Quantum-Touch, and whatever else I deem appropriate, the skin temperature rises to as high as 94Â° F. Clients are amazed at an extremity that now appears normal, and all without pain or side effects.

QT Used on a Daily Basis

Quantum-Touch is remarkably simple to learn and effective. Within my profession, I utilize it on a daily basis with wondrous results. Patients present in the operating room with increasing severity of illness that complicates tailoring an anesthetic. There is no room on my tight rope for error. This modality has given me a buffer zone in caring for my patients (and the staff around me.) It never ceases to amaze me in the result and in where one can use it.