Interview for “What Doctor’s Don’t Tell You” Magazine

Interview for “What Doctor’s Don’t Tell You” Magazine 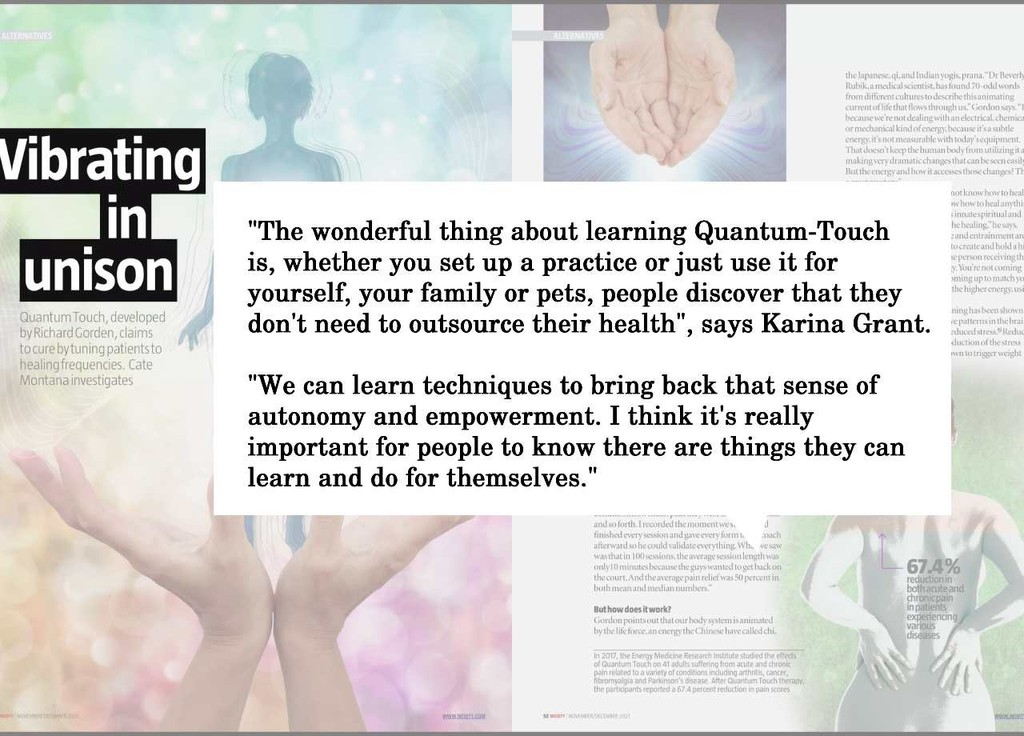 I was thrilled to be interviewed about Quantum-Touch for the November/December issue of Lynne McTaggart’s “What Doctor’s Don’t Tell You” (WDDTY) magazine.

What Doctors Don’t Tell You is a monthly magazine that publishes the latest science and healthcare news, alongside information on complementary therapies and alternative medicines, with features written by leading experts.

WDDTY magazine was started as a newsletter in 1989 by award-winning journalist Lynne McTaggart and has a large international following.

The article seeks to explain why Quantum-Touch works so efficiently and can even be offered via distance healing. This engaging feature highlights two people’s personal journeys to wellness, after finding this amazing modality. One of the featured stories is about one of my early clients – Joanna Gregory from London who arrived as a skeptic.

Joanna’s amazing account of how her debilitating fibromyalgia pain which she had taken medications for and seen many Doctors about. The fibromyalgia pain that left her barely able to walk up the stairs to our healing session – had been eliminated after just one session. During Joanna’s healing session her knees “unlocked” and immediately resolved her pain. Joanna describes how she was able to run down the stairs afterward and was so blown away that she went on to become a Quantum-Touch practitioner.

Another incredible healing story in the article is about Lauren, who attended a workshop with Henri Rand in Virginia and experienced an 80% improvement in her scoliosis since learning Quantum-Touch.

I am honoured to have been able to also share my own personal journey with Quantum-Touch in this informative magazine, with the intention that it inspires other people to learn this powerful set of skills that improves people’s lives immeasurably.

Would you like to experience Quantum-Touch? Come and join me on a workshop and see how easy it can be to reduce and eliminate pain using these amazing techniques.

Read a snippet of Joanna’s incredible story in WDDTY

It started with clicking in one knee and then the other. Within a week, her entire body was burning. “It developed very, very quickly," she says. "I had inflammation and severe pain all over. I couldn’t be touched anywhere because of the pain. I started to develop stiffness in my knees and in my hands, fingers, elbows and wrists. I couldn’t bend them anymore. My walking became limited, and I couldn’t use my hands properly. Soon it was so bad that I couldn’t turn the pages of a book without pain. I couldn’t be a passenger in a car. Frankly, I was terrified. I had no idea what was happening, and I honestly thought that this was the end of my life, that I was going to be in a wheelchair."

She saw seven doctors and specialists who sent her for numerous tests. She had a brain scan, a neck scan and a spinal scan. They put her on pain medications and she had nine injections in the back of her neck. But these didn’t help either-nothing did. Eventually she was given the diagnosis of fibromyalgia.

Around this time, her mother received an email containing an ad from Karina Grant for Quantum-Touch. "Every day was like torture, and I was in a really desperate place with my health, so my Mum mentioned the ad to me," she says.

"At the time, I was very skeptical. I didn’t know anything about energy healing, and I laughed it off. But the doctors could do nothing, and I was so desperate that I eventually agreed to go and try it."

Her mother drove her to her appointment with Karina, and she could barely walk up the steps because of the pain and immobility. But she made it and was immediately reassured by Karina’s calm presence.

"I lay down on Karina’s massage table, and she briefly explained the process. I didn’t understand any of it, but I lay there as she put her hands on my right knee. Immediately I started to experience all these physical sensations, an immense amount of heat was being generated, and I felt tingling. I had no idea what was happening, and then suddenly – and this happened in both knees simultaneously – it felt like a bone or a bolt rotated and unlocked in each knee. It was such a strong force that even Karina kind of jumped back. 'wow!' she said. 'that was a strong motion!' she was caught by surprise as well.”

By the end of the session, an hour had gone by. When Joanna sat up, she noticed that the pain in her knees was gone. “I started to move my knees, and I could move them like before any of this happened. I couldn’t really believe what was happening. It felt surreal. And then I went to leave the appointment, and I ran down the stairs. My mom was waiting for me in the car, and she drove me home. As soon as I got there, I put some music on and started dancing like a child. I couldn’t believe it!"

As she continued to see Karina, the symptoms kept dropping away. "On one occasion, I think it was the second or third appointment, my mom couldn’t take me to the session, so I decided to try a Skype appointment with her. I didn’t understand how healing can work long distance. But when she started working on my hands during that appointment, I immediately felt which hand she was working on. Within two or three days after that my hands were back to normal."

After about 10 sessions, Joanna says she was 100 % back to her old self. The only thing I had to continue to do was work on the underlying trauma," she says. "But from a physical point of view, I had no symptoms ever again. Overall I was never the same person again.”

Since her remarkable healing, Joanna has been taking Quantum -Touch classes to be able to continue to work on herself and help others. "I’m now a practitioner, but I haven’t set up my practice yet," she says. "I just really wanted to learn it to be able to help myself and my family and work with some animals on a casual basis."