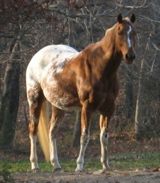 Just over one year ago I had to rush my now, 10-year-old Appaloosa gelding, Lucky, to the NC State Veterinary hospital in Raleigh, NC.  He had suffered a severe injury to his right shoulder resulting in nerve damage and eventually muscle atrophy. The major muscle in his shoulder was not receiving the signal from the nerve to tell it to contract and hold the shoulder blade in place. Therefore, as he would put weight on his right leg, his shoulder would separate from his body and come out to the side. This condition is known as a Shoulder Sweeney.

Six months later, Lucky was released to the pasture but still needed close monitoring. I continued to work with Lucky trying to build up muscle and strength but the process was very slow and looked as if it may never get better. I felt like I had reached a plateau and I was very sad to think that my boy, my ‘ child,’ would never be the same.

My mom approached me about trying Quantum-Touch Energy Healing on Lucky. I had reluctantly allowed her to work on me previously to help relieve the chronic pains in my back. Since she had helped my back pain, I thought let’ s give it a shot. What I saw was amazing! My mom worked on Lucky when she came to see him at the farm. Her Quantum-Touch Energy Healing group worked on him from the circle and a couple of people came out to work on him in person as well. I was seeing muscle just start to ‘ pop’ out! Lucky was no longer having any weakness and he was running and acting just like a horse should! My vet came out to see him and was amazed at his progress and told me that I could begin to start working him under saddle again. I am pleased to say that I have been riding Lucky for short amounts of time in our arena and he is doing amazingly well!

Although I was skeptical at first, I am now a total believer of Quantum-Touch Energy Healing and the power that it has. My mom continues to work on Lucky when she comes to the farm. Her circle group also continues to work on him when they meet. I am so thankful to each and every person who has sent energy to my horse and helped him to heal. It is the best feeling in the world to know that he is no longer in pain.