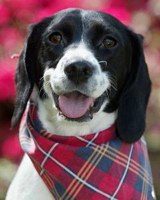 Kokopelli is the name of our eleven-year-old miniature Beagle. She has a sweet disposition, is a tireless walker (we’ve done 60 mile backpacking trips together), a terrific traveler and a wonderful companion. Wherever my wife and I go, the dog goes with us. When we travel from Philadelphia to our second home in New Mexico, Koko and I drive the 3,670 mile-round trip while my wife, Karen, owing to her business, flies back and forth from the Philadelphia area. In general, Koko has been a real blessing to both me and Karen. As always, a trial or two comes along with the blessings. A few years ago, the Beagle was diagnosed with cancer and that was when she was first introduced to Quantum-Touch.

Tim Hurst and and his partner, Joanne, (my QT instructors) worked on her twice for an hour. After surgery to remove a Mast Cell tumor from her right hip, the doctors pronounced her “clean” and no further treatment was required–a blessing. However, due to the amount of muscle removed from her hip, her walking had to be severely curtailed or she’d come up lame. I’d run energy on her hip to help the lameness, but was never certain whether it was QT or the pain pills that did the trick. I’d say, “Come-on, Koke, let’s get juiced,” and we’d head for the bed. Most of the time she’d just lay there and let me run energy, hands-on. When she had enough, she’d just move away. It seemed to work, but I never was certain. Recently, we had an experience that removed the doubt.

This past summer I noticed that a tumor on Koko’s right cheek had really blossomed. I took her to our veterinarian who, after a test, told us the tumor was malignant and the whole routine started over again, beginning with surgery. We were in New Mexico at the time and I was working my way through Alain Herriott’s Supercharging DVD. Each morning the Beagle and I would sit in my recliner (actually, it’s her recliner, but she lets me use it on occasion) and I’d practice on her: sweeping and breathing amplification, allowing, 12-Color Meditation and U¬NAN–the whole works. This time the tests didn’t come back negative, although they weren’t positive either. The laboratory people called the results suspicious. However, the surgery healed up very quickly and we, Koko and I, took off on a seven-day camping trip in the Eagle Cap Wilderness Area in eastern Oregon. The QT sessions continued daily and my dog was a picture of health.

Finally, I took her back to the Matthew J. Ryan Veterinary Hospital of the University of Pennsylvania in Philadelphia for additional surgery–right hip, sternum, and right jaw. By now my dog’s body looked like a zipper collection and she has gone lame again, this time it was her neck. The Doc thought it might be a disk problem, or it could be the result of the surgery forcing her to put pressure on her right foreleg. Anyway, she couldn’t negotiate the stairs in the house, couldn’t get on or off the bed, or her other favorite napping places, had difficulty walking and had a problem holding her head up. Worse, when we tried to carry her or pick her up, she would often cry out in pain. Nothing seemed to help. My wife and I felt heartbroken and helpless.

Finally I got her on our bed and used a low bench so I could be comfortable. I placed the 12-colors in her and gave them a spin, put a U-NAN pattern in her neck along with some copper and silver and wrapped her up in an energy blanket. Then I ran the juice for 45 minutes and she just laid there and soaked it up. When she had enough, she simply moved away from me.

At first I didn’t notice much change, but she mostly napped and relaxed for the rest of the day so I couldn’t really make a meaningful observation anyway. The next morning she jumped off the bed before either Karen or I could prevent it. Disaster! Nope. Next, she took off down the hallway at a trot and down a short flight of stairs to the kitchen without missing a beat. That puppy was healed! That same morning we took her in for her first chemo treatment. When the intern inquired about her neck, we were able to report that Kokopelli was just fine. There wasn’t sign of a problem. Karen and I watched as the intern led Koke away to the treatment room. Her tail was up and swaying back and forth like a little white flag and she pranced along just like she always had. Could it have been Quantum-Touch? I don’t know what the doctors thought, but there wasn’t a doubt in my mind.