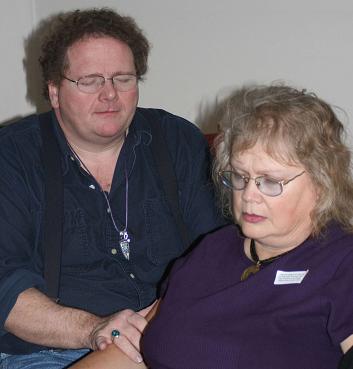 In the Fall of 2007 I attended a Natural Health Festival in Louisville Kentucky USA I was walking around, and came across Julie E. Brent's Quantum-Touch® booth. I was immediately drawn to the large picture of the back of a person, who looked SO MUCH straighter in the after pictures. I was revved up and hopeful from that point on, that Quantum-Touch would help me.

On December 4th, 2008 I called Julie and talked to her briefly on what Quantum-Touch could do for my back, I told her I was born with Scoliosis. She was very encouraging, telling me MY BODY knows what to do and that Quantum-Touch has shown success in this area.

On the first day of the weekend class, after having Quantum-Touch for maybe 1 hour, I was AMAZED at how my back was actually becoming straighter and straighter, I can't thank Scott enough, the other student who worked on me.. I couldn't believe the pictures and most of all, I couldn't believe how more fully I can breathe.

I noticed I breathe now from the abdomen instead of being a shallow breather like before. Overnight, from Saturday to Sunday, my back continued to straighten out even more. Sunday, during our practice sessions in class they worked on me more and I'm just amazed at the difference. I was hoping for improvement, but the EXTENT of improvement is just astounding. I'm now 5' 5" instead of 5' 4".

Thank you Quantum-Touch and Julie and Scott and Kenneth.

Cheryl has described in her own words her experience while taking the Live Basic Quantum-Touch class that I taught in December 2008. There were two students registered for the class Scott and Cheryl, however, for the Sunday morning section of the class, Kenneth, who had previously taken one of my QT classes, joined us with his brother to 'share' in the class and to assist us with the “group” practice session. I did not participate in the practice sessions.

I asked Cheryl at the beginning of the class if she would mind if I document her scoliosis with a photograph and she agreed. We took photos before the first practice session and at the end of day on Saturday. We had completed two full hour practices sessions by then. Then we took two more photos during the day on Sunday. The noon photo showed improvement that occurred overnight and the final one taken after all the practice sessions on Sunday is included in the photo series shown.