When I discovered I was pregnant, I knew I would want a Quantum Birth. My first thought about a Quantum birth team occurred to me after a practice session during a Level 2 workshop that I was teaching. I inwardly prayed for a Doula (a holistic birth attendant) that would join me during my birth. I prayed for a Doula that was highly skilled, extremely spiritual, open to the highest possibilities, held a similar world view to me and with healing skills – preferably Quantum-Touch!

That night after the workshop ended, I attended a BBQ. No one knew I was pregnant at that time. A friend of a friend randomly came up to me and said, “I have something for you that I think you will like, I will forward it to you now.”  And she walked away. I opened my email and read about a workshop being hosted by Serene Birthing. Several conversations later and I was booked in. Also, they would also both be learning Quantum-Touch!

My prayer was answered above and beyond what I could have wished for. Their understanding of the entire process and all the levels of reality contained within it is phenomenal. I am so blessed to have had Charlotte and my husband Simon give me Quantum-Touch healing during my birth and to learn about the spiritual aspects of birth from Ora.

Our pre-birth sessions were an amazing experience of remembering that in birth, as with everything else, our creator/the universe is in charge. Shift above whatever it is you are scared of and always relate only to source. Everything else is directed from that place. This foundation is essential and I remind myself of it as much as possible in life. It is from that place that we see miracles.

As you know, I like to think outside the box, so I asked Jennifer (Chief Magical Officer)  of Quantum-Touch to recommend a Quantum-Touch Doula that could send me healing during the labour. She recommended Kim Luchau, Quantum-Touch Instructor, who is based in Hawaii and trains all the Doulas on the island in Quantum-Touch. Perfect!

Kim and I exchanged Quantum-Touch over Skype several times and developed a soulful connection instantly. Kim told me that when the Dalai Lama came to Hawai‘i in 1994 he told his tour guides the two places he wanted to visit on Kaua‘i were Polihale and Anahola. Polihale is the place where souls leave for the next world and Anahola is where souls enter the earth. "Ane" means the breath of life, "Hola" means the hour. The two words together translate as "birth."

I know that my baby Aytan was connected into this energy through Kim’s presence on the island and her innate ability to connect to babies in utero.
She continued to support me through late pregnancy with Quantum-Touch and we had many synchronistic healings. So much wisdom and so many Quantum-Touch blessings were sent through Kim. I recommend that anyone giving birth and wanting a distance Doula contact Kim!

The right people always show up in our lives. We are all connected and distance is a concept. Kim was able to support me wholly from Hawaii. Remember that energy flows where attention goes. We can all offer our Quantum-Touch gifts from where we are right now.

I would also like to thank Suzanne Newman, a fellow Quantum-Touch instructor from the Isle of Mann for sending distance healing during the birth too. Suzanne and I attended our advanced workshops together, several years ago. Who knew, we would reconnect through birth! She is an awesome Quantum-Touch Doula practicing in the Isle of Mann. What a blessing!

At 7.19am on 13th January I got a “random” text from my local optician simply saying the word U-nan! She then texted me an hour later saying, “Sorry my baby got hold of my phone.” As soon as I received the text from her baby, I started using the technique and it helped me stay calm and focused during some intense pre-labour moments. I love that a baby I had never met was playing with a phone and sent me the exact technique I needed in that moment. I remember thinking - Wow you really can’t make this stuff up! 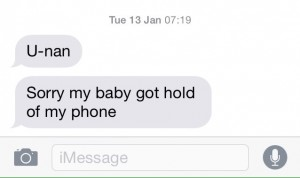 Everything you need is always given to you! Just be open and messengers will turn up in the most surprising of places.

I met Lisa Jennings when I spoke at The Association of Meridian Therapies conference in 2013. Lisa volunteered for a stage demonstration for her back pain which was quickly resolved with Quantum-Touch. We became instant friends and I discovered that Lisa is a highly regarded nutritionist, acupuncturist and hypnotherapist. Lisa attended my Quantum-Touch workshops to add to her energy work skills. Combining all her knowledge together, she recorded 3 brilliant bespoke hypnosis audio files for me. These were amazing! Her relaxing voice spoke of natural birth, included all the aspects I wanted and alleviated any concerns.

So much of what we want just requires a subtle shift of relaxing our mind into it. Our self talk is key – our language directs outcomes.

After all the preparation, the day finally came where I would give birth to Aytan. As we all know, a birth can go many ways. Regardless of our prep, the universe always has a higher plan. The biggest lesson I learned of all, is surrender.

I am delighted and blessed to say that I had a natural birth from start to finish with zero medical interventions – including no gas and air. The support I had from my husband Simon and Charlotte throughout the experience was immense. The technique we used most was toning from Level 1 and it seemed to provide what I needed during contractions. The sounds helped to ride the waves and as long as the three of us were in sync with our tones, I felt I was having very strong pain relief. It may amuse you to know that two hours of active labour were spent in the hallway as there were no rooms available – the amusing part is that we were toning at full volume in the waiting room of a central London hospital. Luckily it was the middle of the night and we had an empty corner. However, the staff must have raised more than one eyebrow!

Aytan arrived at 8.45am on the 14th January and has changed our world ever since.

We took a few days to name Aytan, which means strength. His energy holds a mixture of strength, wisdom and sweetness, which I could see as soon as he arrived.

He embodies mindfulness and I am on a fast track phD to learning the true meaning of giving everything over to the universe. There is now another soul in my life who has his own agenda, life tasks and journey. I am honored to be his guide, however I am certain that it is he who will be my teacher.

Quantum-Touch was a beautiful and powerful part of my entire pregnancy and birth. I highly recommend that all doulas, midwives and parents-to-be learn Quantum-Touch. It makes the world of difference. I am delighted to have returned to giving Quantum-Touch sessions already!